On 3/29/15 I drempt I was handed an envelope in the mail where someone had returned some money to me in the mail and it added up to $3500. It was from someone in one of the southeast asia countries, from a missionary.

When I opened the envelope up, the dollars inside were missing portions of them, like someone had cut out sections of the dollars and there was only about 3/4ths to 2/3s of the dollar left. So I had these dollars with what looked like a precise scissored section cut out of them and another section had a random tear out of it. I also thought the bank would accept them, even though parts of the dollars were scissored and torn out. 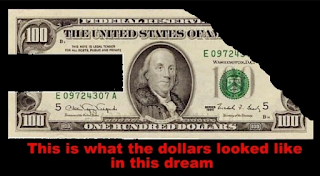 Then the money which I had, turned into cards, playing cards. Then there were 2 dogs in the dream. The 1st dog was light colored and the 2nd dog was dark colored. They looked to be a rottweiler type of dog. They both had gotten hold of the cards and started trying to tear into them. The 1st dog, the light colored dog started getting at tearing up one of the cards while the dark colored dog had a portion of the stack of them doing the same, all the while I had the rest of the cards in my hand, trying to stop the dogs from tearing up the cards. 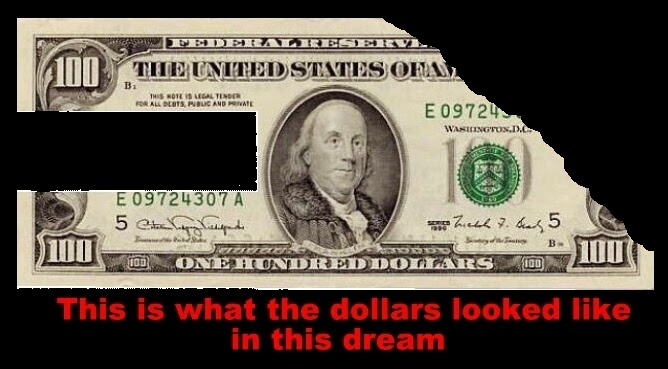 The money turning into cards are "what's in the cards" for the US. The 2 dogs, one light with one of the cards and the other dark with a portion of the deck; these dogs may not only represent our currency crisis coming, but more so, represent the over all troubles that are in the prophetic cards to come. The dark dog had several of the cards, like a third of the deck and each card would represent the trauma events soon to come upon our nation because we have forsaken God and his commands as a nation, which would have given us sound economics, but instead, we have corruption at all levels.

The light colored dog came first in the dream and will represent the 1st time period of the troubles to come, with the 2nd dog, the dark dog, representing the more severe troubles in the cards after. Dark days for America are coming.

The USD will be to be torn into, like a dog tearing into a newspaper. Prepare for a great tearing up of the securities that once stabilizized our nation.

Economic notes: In another economic dream I had here, God told me to hold onto US dollars and silver. I did not realize at the time, but when the dream was given, is when the US dollar began to take off (in September 2014), breaking out of its trading range and greatly gained in value.

In the other dream, I was told to hold onto silver. Since advice on that dream was spot on about the US dollar, we can assume, because silver is at a bottom, that this would be a good time to accumulate some for the devaluation coming.
Update - 7/2020. The time is soon, for the currency reset.